"A Daemon whose courteous manner and graceful bearing exude an air of refinement. Dia always prioritizes her companions above herself. She still holds distant memories of wandering through the darkness, and a faint light dancing in the palm of a hand. Wielding a crossbow in one hand and a pistol in the other, Dia excels at unleashing a hail of attacks from afar. She can spring into the air, putting distance between herself and her foes, even while maintaining the onslaught."

Dia (Japanese: ディーア) is a Daemon in Oninaki. She wields a pair of farshots which allow ranged attacks, and he has skills that hit groups of enemies. 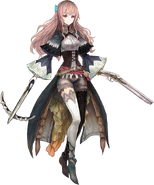 Dia official art
Add a photo to this gallery
Retrieved from "https://oninaki.fandom.com/wiki/Dia?oldid=885"
Community content is available under CC-BY-SA unless otherwise noted.